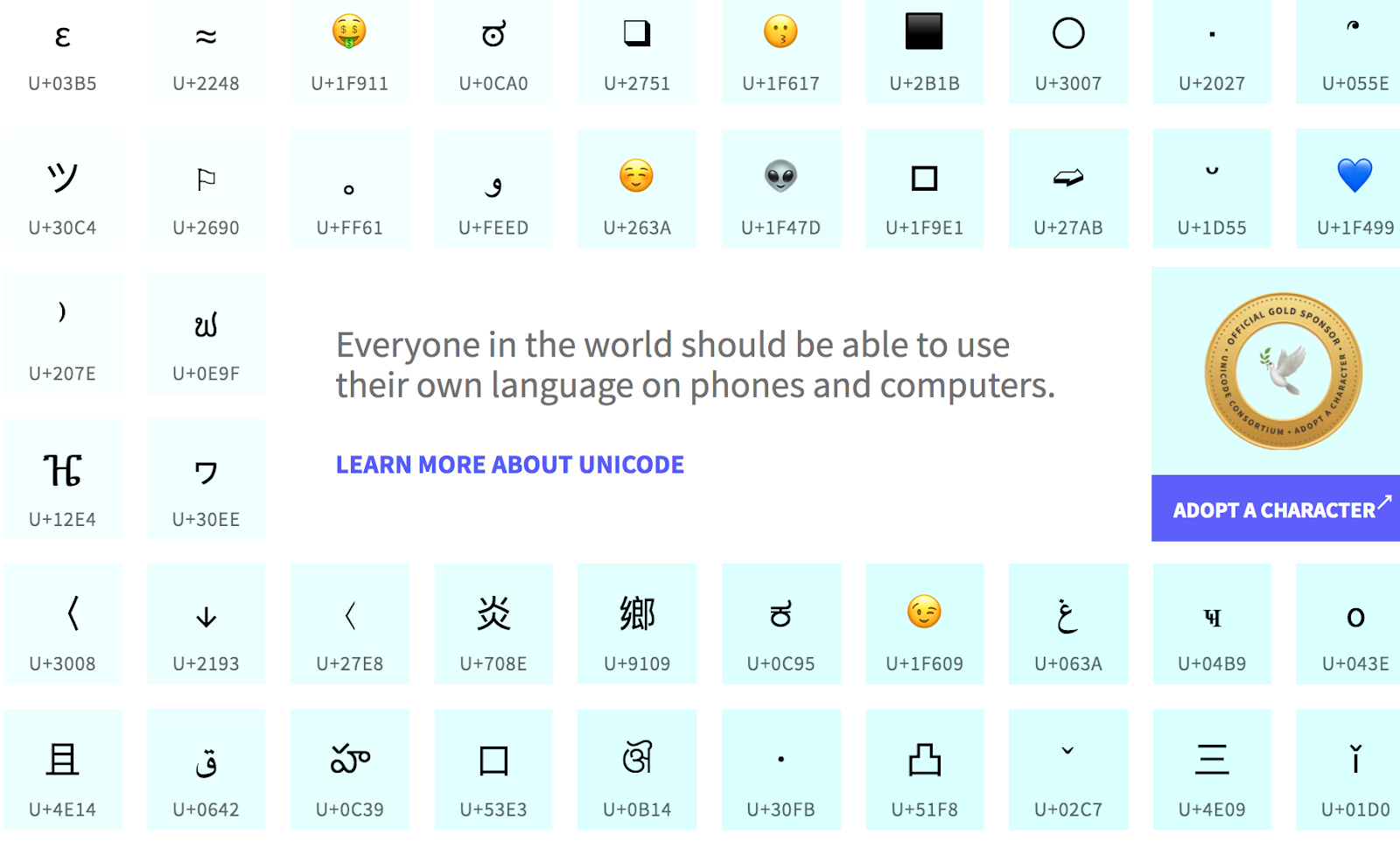 Unicode was developed to represent all of the world’s languages on the computer. Early in the history of computers, characters were encoded by assigning a number to each one. This encoding system was not adequate since it did not cover many languages besides English, and it was impossible to type the majority of languages in the world.

Then the Unicode standard emerged! The Unicode standard consists of a set of code charts for a visual reference of what the character looks like and a corresponding “code” for each unique character. (See the chart above!) And now, the world’s languages can be typed and transmitted easily using the computer!

However, the adoption of Unicode has also introduced a whole host of attack vectors onto the Internet. And today, we are going to talk about some of these issues!

Some characters of different languages look identical or are very similar to each other.

These characters all look alike, but they all have a different encoding under the Unicode system. Therefore, they are all completely different as far as the computer is concerned.

One of the ways that attackers can exploit this is during a phishing attack. Users put a lot of trust in domain names. When you see a trusted domain name, like “google.com” in your URL bar, you immediately trust the website that you are visiting.

Attackers can take advantage of this trust by registering a domain name that looks like the trusted one, for example, “goōgle.com”. In this case, victims can easily overlook the additional marking on the “o”, trust that they are indeed on Google’s website, and provide the fraudulent site their Google credentials.

Spoofing domain names this way can also help attackers lure victims to their site. For example, attackers can post a link “images.goōgle.com/puppies” on a social media site. She gets her victims to think that the link redirects to a puppy photo on Google when it really redirects to a page that auto-downloads malware.

Another interesting exploit utilizes the Unicode character (U+202E), which is the “right-to-left override” character. This character visually reverses the direction of the text that comes after the character.

For example, the string “harmless(U+202E)txt.exe” will appear on the screen as “harmlessexe.txt”. This can cause users to believe that the file is a harmless text file, while they are actually downloading and opening an executable file.

Just what else could be done using the visual spoofing capabilities of Unicode? Quite a lot, as it turns out! Unicode can also be used to hide backdoors in scripts. Let’s look at how attackers can use Unicode to make their manipulations of files (nearly) undetectable!

There is a script in Linux systems that handles authentication: /etc/pam.d/common-auth. And the file contains these lines:

So what can an attacker do if she gains temporary access to the system? First, she can copy the contents of pam_permit.so to a new file, pam_deոy.so, whose filename looks like pam_deny.so visually.

Then, she can modify /etc/pam.d/common-auth to use the newly created pam_deոy.so should password checking fail:

Now, authentication will succeed regardless of the result of the password check, since both pam_permit.so and pam_deոy.so contain the script that makes authentication succeed.

And since n and ո look alike in many terminal fonts, /etc/pam.d/common-auth will look very much like the original when viewed with cat, less or a text editor. Furthermore, the contents of the original pam_deny.so was not modified at all, and still contains the code that makes authentication fail.

This backdoor is therefore extremely difficult to detect even if the system administrator carefully inspects the contents of both /etc/pam.d/common-auth and pam_deny.so.

You can use this tool to test out some possible Unicode attacks:

One way that you can protect yourself against Unicode attacks is to make sure that you scan any text string that looks suspect with a Unicode detector. For example, you can use these tools to detect Unicode:

Unicode has introduced many new attack vectors onto the Internet. Fortunately, most websites and applications are now noticing the dangers that Unicode characters pose, and are taking action against these attacks!

Some applications prevent users from using certain character sets, while others display odd Unicode characters in the form of a question mark “�” or a block character “□”.

Is your application protected against Unicode attacks?